Brailliant and over the Moon: The Chinese Tactile Collection

Thinking about inclusion is not something new in the world of reading, and the Leiden Special Collections have pieces to prove it. In this blog I want to highlight a collection of 19th century books in the Special Collections aimed at helping the blind in Qing China read their mother tongue.

This blog was previously published on the LeidenSpecialCollections blog.

Tactile reading was developed in 19th century Europe and the US. Of all the various embossed fonts that came into being, Braille, with its six dotted cells, is the most well-known. Missionaries took this principle of tactile reading and brought it to Qing China. In my private collection I have 1907 ragdoll patterns that, among others, show a blind Qing man reading a book with his fingers, with a pattern of a Qing evangelist printed right below him. Not being able to read means not being able to read the word of God; with that, we have found the drive behind the reading mission of the missionaries.

Leiden Special Collections holds three early Chinese braille books. They are braille representations of Taiwanese speech prepared by missionary William Campbell (1841-1921) of the Presbyterian Church of England. The Presbyterian mission had over a hundred mission stations by 1890, mostly in the southern part of the mainland Qing Empire and Taiwan, hence the choice for this variety. Two of the three works by Campbell are learner’s textbooks (The Vernacular Embossed Primer Enabling the Blind People to Write and Read Books in 1889 and An Embossed Reading book for Blind Readers of the Amoy-Chinese Vernacular in 1896). They introduce the Taiwanese braille syllabary, numerals, and punctuation marks, and end with short exercises coming from the Holy Scriptures to practice the newly acquired skills. The third work by Campbell may come as a bit of a surprise. 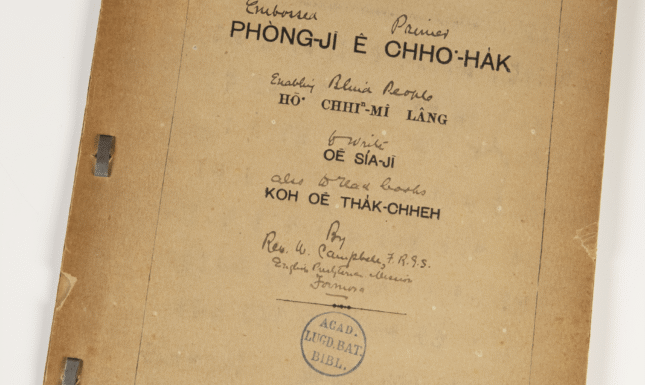 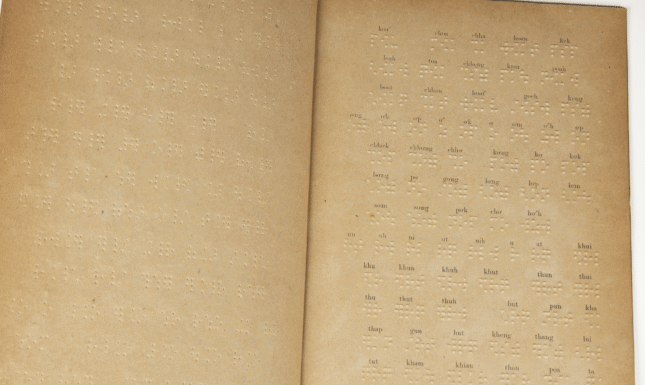 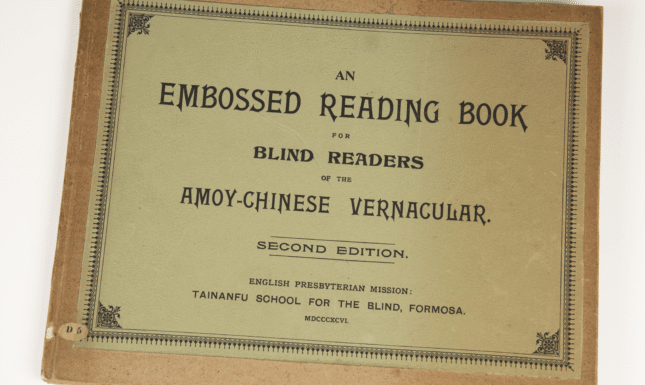 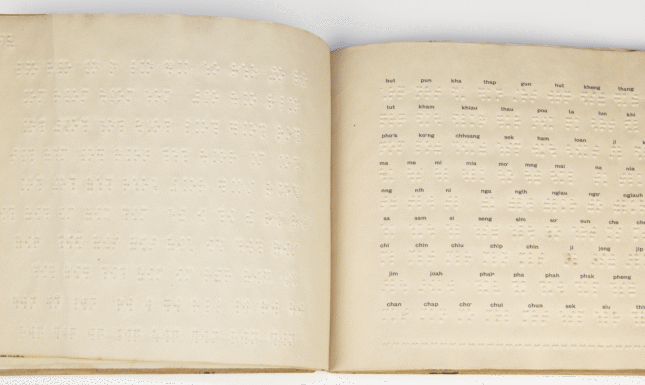 In 1896, Campbell introduced a braille rendition of the Kangxi Emperor’s Sacred Edict of 1670. This work words the basic principles of Confucian orthodoxy and was thus widely taught across the empire in the many varieties of Chinese. In the introduction to this embossed Taiwanese version of the Sacred Edict, the publisher goes out of his way to make something perfectly clear:

“the Sacred Edict is simply a code of ethics, containing no reference whatever to the source of all right action, man’s dependence on, and responsibility to, the God and Father of our Lord Jesus Christ.”

The Braille as employed by Campbell is not very different from the conventions used to represent Chinese languages today. Separate braille cells are used to mark initials and finals, with the additional option to add cells for the marking of tones. However, the first tactile fonts to be introduced into Qing China were not based on braille. Instead, they were all based on the Moon type.

The Moon type can be best described as a system that is made up of raised lines that have a strong resemblance to the print equivalent of alphabetic letters. Therefore, the Moon type was found suitable for those who lose their sight later in life, or for people who may have a less keen sense of touch. William Moon himself, who was blind, had produced tactile fonts for many languages of the world. For nine Sinitic varieties, he prepared portions of the Bible using his own type, by which some blind persons in the southern provinces had been taught to read.

Of this Moon type, our library holds a copy, again prepared by William Campbell in 1888, of the Gospel of Matthew. Comparing the Moon type to the script used in the Gospel’s text, one can see that Campbell has made adjustments to mark tones.

Historical tactile representations of Chinese languages could do with more research. Questions that came to my mind as I was sitting in the reading room include: did Campbell make any small or big alterations to the Sacred Edict in order to make it less Confucian, more Christian or, the other way around, did he add Qingness to Matthew? (Inuit versions of the Bible, for example, turned the Lamb into the Seal)

Answers to these and other questions, however interesting, lie in the embossed text. As a reader of Braille, the first thing that I wanted to do when the books arrived in the reading room, was to touch the text with my fingers. I was hesitant, because touching it, when done enthusiastically, could mean that the embossments could very easily be pushed back into the paper. It is something that the Library has to think about, and so a new challenge emerges. While we are at it, let us start a conversation about acquiring more antiquarian tactile books, making it clear that we fully realize that talking about inclusion today cannot do without a thorough understanding of inclusion in our past.

As with any Chinese language and linguistics related topic, a short introduction to tactile reading can be found in Encyclopedia of Chinese Language and Linguistics, General Editor Rint Sybesma in the entry “Writing Systems for the Visually Impaired” by Eleni Andrist. Consulted online on 21 March 2021. First published online: 2015